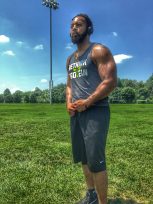 Donta is a vegan bodybuilder from North Carolina. He has a huge following on his Instagram page, the.southern.vegan, where he shows all the great vegan food he has found around the country. We met Donta during our first class to NYC and is a graduate of the Main Street Vegan Academy Advanced Class. He looked out for us during our stay in NYC, making sure we knew which way we were going and that we made it back to our place. He also took us to some great vegan hotspots.

1. How long have you been eating plant-based? I have been vegan for 9 years, since September 2009, soon after I had graduated from college.

2. What made you decide to go plant-based? It has been a process but I decided to go vegan after I had a health scare and had to be admitted to the hospital which was a very bad experience. I had a spontaneous pneumothorax where they had to put in an emergency chest tube to reinflate my lung. There was a screw up and miscommunication with the intern who was taking care of me and he took the chest tube out only to have my lung collapse again. Then they overdosed me on medication. I told myself then and there that I would do whatever I could to get healthy, and stay healthy so I wouldn’t have to go through that experience again. I was praying during this time to stay alive. I was still in college when this happened and I started reading about health. The first thing I cut out was trans fats and I started buying organic foods. Around graduation time I was listening to a radio show by a doctor who said that humans aren’t really carnivores but were herbivores. We didn’t have fangs, or claws to kill for our food and the light bulb came on. I started doing more research and I then cut out chicken, fish and cheese. I just kept cutting out more animal products the more I learned until I was vegan. I have a cousin in the family who I talked to at a family BBQ and he was going vegan at the same time. He had watched a documentary that made him want to go vegan. We were both graduating from college that year and we both got jobs in Washington D.C. so we decided to move there and become roommates.

3. What are the benefits eating plant-based have done for you? My springtime allergies which I had for years disappeared. I think it had something to do with giving up the dairy. I had cut out the eggs, milk and cheese and then I noticed the really bad sneezing went away.

4. What did you find to be the biggest challenge of eating plant-based? I started this process during my last year in college and I didn’t know how to cook so that was
a challenge. At first I was thinking what am I going to do? What am I going to eat when I go out? I had cut out red meat at that point and artificial colors. I was experimenting a lot. I was learning how to cook and finding new products. I made tofu scramble every day, I would just change it up a little. My cousin and I started living together so it was good to have someone else doing it with me. We would make the same meals every week in the beginning. My cousin is still going strong today with being vegan.

5. What are your go to foods for breakfast, lunch and dinner? Breakfast: I have oatmeal with fruit, nuts, bananas, flaxseeds, pumpkin seeds or I would have a big bowl of different fruit, kiwi, bananas etc. For lunch I have kale salads with some roasted vegetables, sweet potatoes, tempeh, with tahini dressing. Dinner is usually grains, beans and rice, tacos, bean burgers with a side of broccoli or sweet potato. I am SOS at home so I don’t use sugar, oil or salt in my food. I rarely cook with oil. I use dates or bananas as sweetners. To replace salt I use nutritional yeast.

6. Do you have a favorite cookbook, tip or recipe to share? For newbies it helped me to try to veganize the foods I already liked. I would try to see what I could swap out for the ingredients to make it vegan. It is ok to use Gardein, Beyond meat, vegan fish and vegan cheese in the beginning. These are not really health foods but they are good transition foods as you try to move toward more healthier foods. These foods have no trans fats or cholesterol so are better for you. For Family it helps to have them on board. My mom is 90 % vegan. She is primarily vegan at home and Dad is 60% vegan and 100% vegetarian. When I go home the fridge is always filled with foods I can eat. We didn’t have a turkey at Thanksgiving and we had a vegan table that the vegan food went on.

North Carolina has one of the biggest vegan Thanksgiving Buffets. It is growing here with more vegan restaurants opening and more vegan options appearing on the menus of other restaurants. There are also many vegan events happening here.